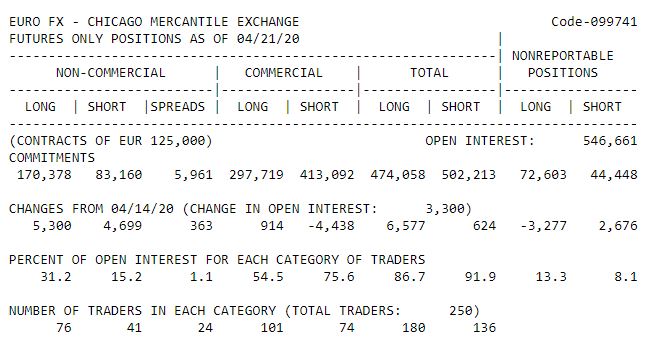 My Bias: Bullish
Last week’s video conference of members of the European Council to discuss the EU’s response to the Covid-19 outbreak again highlighted the slow pace and complexity of decision making by the bloc’s leaders.
Combined with a crash in IHS Markit’s composite purchasing managers’index for the Eurozone in April to 13.5, by far its lowest reading since the survey began in mid-1998, it’s hard to see anything other than a further decline in the Euro.
Euro price at risk of further losses

The latest purchasing managers’ indexes for April, released late last week, were uniformly bad, confirming that the global economy will be hit hard by the Covid-19 pandemic. However, the PMIs for the Eurozone still stood out as particularly weak, with the composite index for the region down to 13.5 – by far its lowest reading since the survey began in mid-1998 and considerably below all forecasts in a poll by the Reuters news agency.

After being bearish in the previous week, speculators added new positions to both sides of the transaction. They increased long contracts by 5.3K and short contracts by 4.7K. They were 87.2K net long, which was only slightly changed from 86.6K in the week before. The speculative net positions trend above the 33 weeks moving average which suggests we are still bullish on Eur futures. The price action has been trading downwards, against the market sentiment. This creates an opportunity to buy EURUSD on dips. 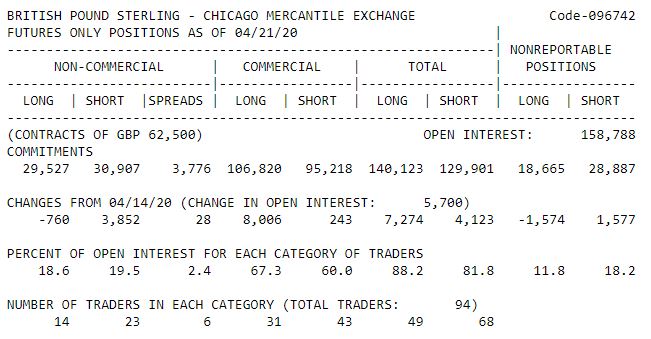 My Bias: Bearish GBPUSD
Generally, GBP/USD isn’t providing much of a directional cue at the moment after a fast and furious March, early April. Is the recent weakness a pullback or the beginning of a larger decline? It may take a little time to figure that out, but there are levels to keep an eye on.

If the low from last week can maintain, then we may have a higher low from the one seen earlier in the month. If this is the case, then it is possible the trend off the panic March low will continue. It won’t be long though before a test of significant resistance.

The Cable, as expected, was down this week. The pair closed at 1.2365 on Friday. It was in line with the current speculative sentiment. This week speculators covered 760 long positions and added fresh 3.8K short contracts. This put them into being net short by a 1.3K contracts. They are net short for the first time this year. If the selling continues we are likely to see more downside in GBPUSD market in the coming weeks. 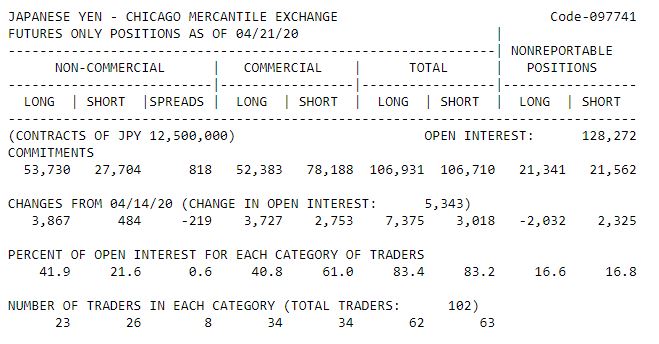 My Bias: Bearish USDJPY
USD/JPY is trading in a tight consolidating price range around $107 to $108 over the past 10 days since April 15, 2020. Due to a lack of momentum and economy slowdown, Japanese Yen is trading below the major daily MAs viz., 50-day and 200-day. The pair is ending the week with a similar momentum and around the same trading price from where it began due to the dearth of traction

Positions:
Speculators were bearish on JPY futures yet for another week. This time they added 3.8K new long positions and only 484 short positions. Speculators were 26K net long, up from being 22.6K in the previous week.The net speculative positions trend above 33 weeks moving average. All these signals are strongly bearish and the price action is also pointing to the downside. I expect more declines in USDJPY prices. 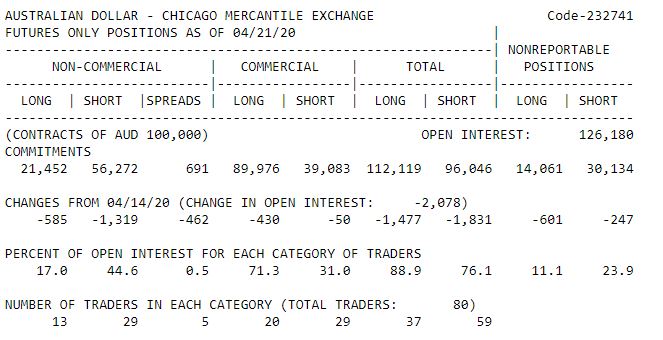 My Bias: Neutral AUDUSD
The market seems to be trying to figure out whether or not we can continue to see global growth, and although China is going back to work, the reality is nobody is buying their products. Demand has cratered, so one would have to believe that sooner or later the Australian dollar will feel the punch. The RBA is likely to continue to stimulate the economy as the Australian economy is entering its first recession in over 30 years.

Speculators took profit again this week. They covered 585 long positions and 1.3K short positions. They were 34.8K net short, which was only a small bit changed from the previous week. Although the AUDUSD price is recovering from the recent carnage, there are no bullish signals in the C.O.T analysis. 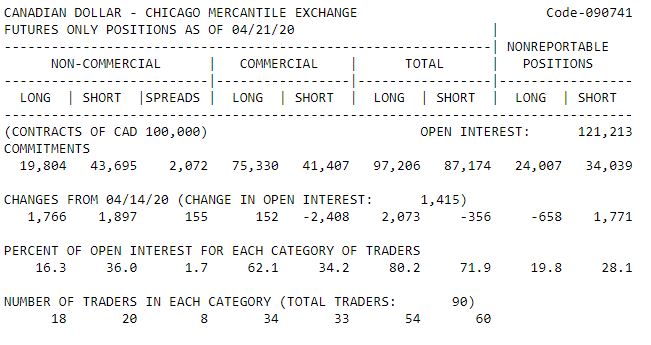 My Bias: Neutral USDCAD
The Canadian dollar is the worst-performing major G-10 currency pair since Friday’s close and it’s all because of free-falling oil prices. West Texas Intermediate (WTI) plunged from $18.27 U.S./barrel at Friday’s close to $13.00/b in early Toronto trading due to a combination of technical factors and storage constraints.

Members of the Organization of the Petroleum Exporting Countries, Russia and U.S. producers are pumping crude in a race for market share before the May 1 production cuts come into effect, and there is an extreme shortage of buyers due to the coronavirus pandemic. Finding storage is a problem with oil-tankers holding 160 million barrels as of Friday, compared to 80 million barrels at the beginning of the month.

Once again, there was only a small adjustment in CAD positions. This week speculators added 1.7K new long positions and 1.9K short positions. They were 23.9K net short, which was almost unchanged from the previous week. I don’t expect any movement in USDCAD prices based on the above signals.