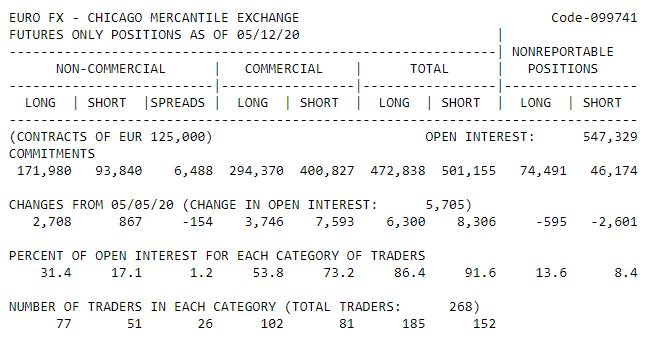 “EUR/USD should remain stuck around the 1.08 level next week. The data calendar does not suggest meaningful risks to the cross in either direction. In the US, the FOMC Minutes (Wed) should not bring much surprise, with the committee likely further downplaying the odds of negative interest rates. The initial jobless claims (Thursday) are likely to decline to 2.5 million as the re-opening of the economy gathers pace. This is still a dismal number, but less bad than what we seen previously. In the eurozone, the forward-looking May PMIs (Fri) should recover from the record lows. If anything, the latter may provide some upside potential to the cross at the end of the week.

Speculators added new 2.7K long positions and, at the same time they added only 867 short positions to their portfolios. They added a total of 4.7K longs in the last weeks and 6.2K shorts. This would suggest some bearish bias but a very weak one. This week, they were 78.1K net long, which was changed from 76.3K in the previous week.The price action ( EURUSD ) was unchanged last week and the speculative positions are not showing any clear direction. I would like to wait and see if we have any meaningful changes in positions next week. 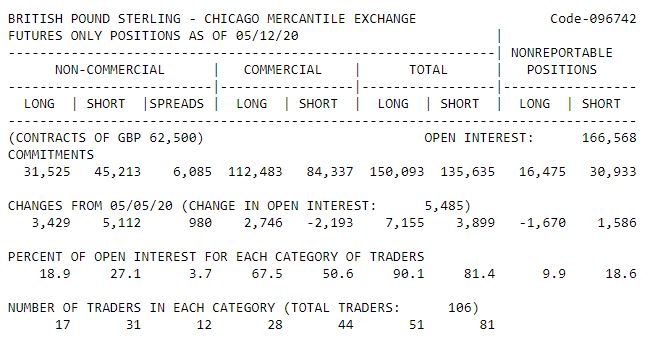 The Pound is trading on the back foot following a report from the Office of Budget Responsibility which showed that the UK government borrowing was on course to reach £300 billion in 2020-21. This would put the budget deficit at 15.2% of GDP, the highest level since World War 2, as the government increases spending to keep the UK economy afloat during the coronavirus crisis.

The OBR warned that the actual figure is likely to be higher as it doesn’t include the extension of the government’s job retention scheme. Earlier this week Chancellor Rishi Sunak announced that the furlough programme will be extended to October, although with some contribution from employers. The scheme has so far cost £70 billion through to July.

After being strongly bearish in the previous week, speculators added new positions on both sides of the transaction. They added 3.4K of long positions and 5.1K short positions. They were 13.7K net short, which was less from 12K in the previous week and lowest since they became net short. I expect the current downtrend to continue in the coming weeks. 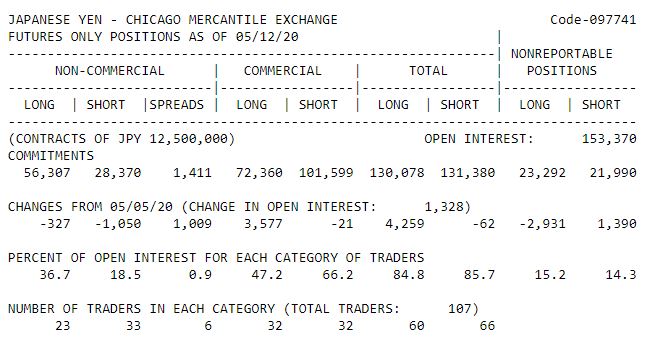 The US dollar initially fell during the trading session on Thursday but found enough support below the ¥107 level to turn around and show signs of strength. The market looks highly likely to see a lot of volatility, as the pair tends to be sensitive to the overall risk appetite of traders. A lot of times you will see the S&P 500 greatly influenced what happens next, and clearly of the upward swing in the stock markets in the United States during the day helped the situation.

The market has shown a proclivity to hang around the ¥107 level, as it is a large, round, psychologically significant figure and of course the previous support level that has been massive resistance. The fact that we have gone back and forth through this area tells me that we are probably trying to get rid of the meaning of this level, at least as far as its importance. The 50 day EMA is above and is sloping lower as it is painted on the chart in red. It has offered a significant amount of resistance recently, and therefore should be paid attention to. If we break down below the candlestick during the trading session on Thursday, then obviously it is a very bearish sign. At that point, it is likely that the market continues to go much lower.

Speculators took profit this week. They covered 327 long contracts and 1K of their short contracts.They were 27.9K netb long, which was only a small bit changed from 27.2K in the previous week.The price action still points to the downside ( usdjpy ) but with speculators being less bullish, perhaps the bottom is near. My bias remains bearish until there are more signals otherwise. 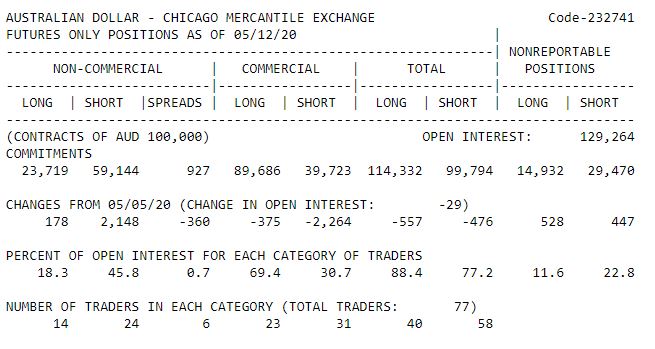 The Australian Dollar had started the session on the front foot following some bright spots in Chinese data, which overshadowed threats from President Trump to cut ties with China.

Chinese industrial production jumped 3.9% month on month in April, well above the 1.5% increase forecast. The figures boosted optimism that the world’s second largest economy was progressing well in restarting industry after the covid-19 lockdown.
Chinese retail sales were slightly more disappointing, down -7.5% against an expected -7% drop. However, this was a substantial improvement from -15% decline in March.
China is Australia’s largest trading partner. The Australian Dollar is often considered a liquid proxy for China.
There is no more high impacting Australian data due to be released this week. Investors will now look ahead to the release of the minutes from the latest Reserve Bank of Australia monetary policy meeting on Tuesday.

Speculators added 2.1K new shorts and left their longs unchanged. This is a bearish bias for AUD futures traders. Speculators were 35.4K net short and it was changed from being 33.4K in the previous week. The price action was trading down and I expect this to continue 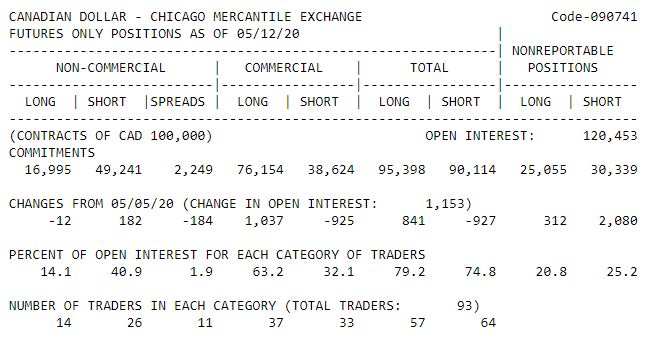 USD/CAD continues to trend down as oil shows strength and the U.S. dollar is losing ground against a broad basket of currencies.

The better-than-expected U.S. Non Farm Payrolls and Unemployment Rate reports have initially provided support to the American currency, but the U.S. Dollar Index failed to get above the 100 level and declined closer to 99.5.

The reports showed that job losses were smaller than previously expected, although the U.S. economy still lost as much as 20.5 million jobs and the Unemployment Rate skyrocketed to 14.7% as virus containment measures dealt a heavy blow to many industries.

However, the market got accustomed to worse-than-expected reports so the news was considered as a positive catalyst and led to increased buying of riskier assets like the Canadian dollar.

There were no meaningful adjustments in positions this week. My analysis from the previous week stands valid:

Speculators were clearly bearish this week again. They added only 975 of long positions and almost 4K of short positions. They were 32K net short, which was changed from 29K in the previous week. There is no strategy for now but my bias would be to the downside from here.