The report breaks down each Tuesday’s Open Interest and gives us a powerful view on what exactly the big guys have been doing in the marketplace and drone çekimleri what their plans might be.
It is issued every Friday and includes data from Tuesday to Tuesday.
The three days prior to the kurumsal tanıtım filmi release date are not included.
This is an essential tool for gauging drone çekimi long term sentiment in futures markets. 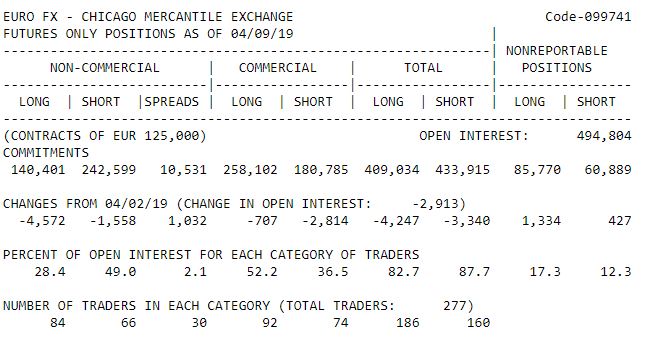 My Bias: Becoming oversold and bottoming

U.S. inflation numbers showed improvement in March. CPI climbed to 0.4%, its highest gain since January 2018. The producer price index also looked strong, climbing 0.6%, a 5-month high.
EUR/USD has reversed directions in the Friday session, after slight losses in the Thursday session. Currently, the pair is trading at 1.1311, up 0.50% on the day.
Speculative extreme positions grew on rising prices suggesting a push upwards.

After adding fresh 24K shorts two weeks ago, speculators took some profits last week. They covered 4.5K long positions and only 1.5K shorts. They were 102K new short. This is yet another consecutive week with higher net positions in this market. Historically, we are looking at 120K as an ultimate low. There is still some room for more shorts but at this point EUR market is getting seriously oversold. The share of open interest stayed at 49% for another week. The U turn in trend is imminent.

The bottom is likely to carve soon. Build up long term long positions. 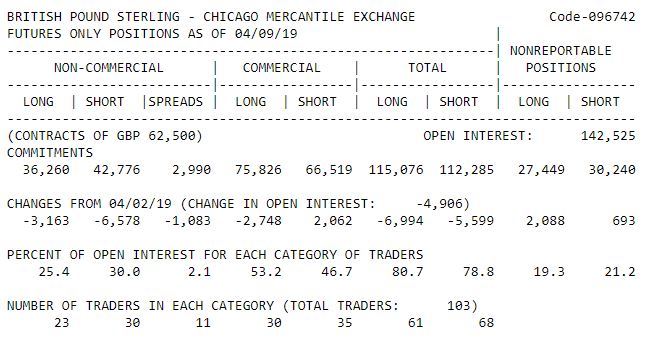 The UK received an extension from EU this month thus avoiding hard-Brexit scenario. After the current agreement, the Brexit deadline extended to October this year. It is good news but the main problem has not solved yet. GBP/USD slightly higher at the beginning of the month as U.S dollar retreat. But, the pair stay silent after the Brexit extension.

Speculators took profits this week but they covered more shorts than longs, 3K vs 6.5K respectively. Once again there is no sign of bearish sentiment in this market, despite the Brexit is still on the news wires. Speculators were 6.5K short, which is lowest since they became net short back in June 2018. It’s only a matter of 6K positions for speculators to become net long on GBP futures. If the trend continues, we might see in the the coming weeks. 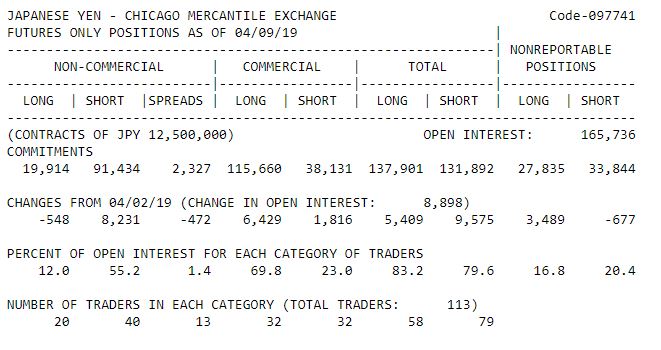 The Japanese economy continues to struggle, as weak global demand has taken a toll on Japanese exports and manufacturing output. This was reflected in a Bank of Japan forecast last week, which downgraded its assessment for three of the country’s nine regions.

After three losing sessions, USD/JPY has reversed directions and moved upwards. In Thursday’s North American session, the pair is trading at 111.41, up 0.36% on the day.

Speculators were clearly JPY bearish this week, despite higher prices against USD Dollar. They covered 548 long positions but added a significant 8.2K new shorts to their portfolios. This was a 3rd consecutive week with speculators adding fresh shorts. Share of open interest grew to 55% but its still good bit away from the extreme level of 63%. I expect some more upside to play out but this market is getting slowly overbought.

Still biased towards the downside here. Will be looking to sell off the resistance at 114.00 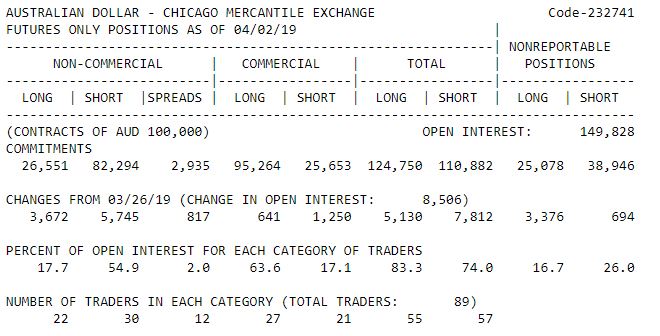 The Australian Dollar spent most of its time aiming narrowly higher against its US counterpart this past week. Initially, Aussie found support as RBA Deputy Governor Guy Debelle disappointed dovish expectations by hinting that the central bank is still in a wait-and-see mode for interest rates. Then, a lot of prior gains were trimmed as the US Dollar soared with local government bond yields.
Definitely AUDUSD has been a roller coaster and not fun to trade recently

No much change in speculative positioning. They added 2K new longs and only 603 new shorts this week. They were 54.4K net short, only slightly changed from the previous week ( 55.7K )

Mixed. The price is ranging with no clear direction 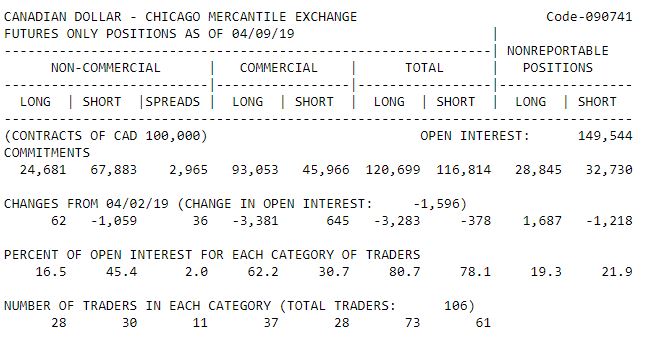 It was a very quiet week for Canadian events, with no major indicators. In the U.S., inflation numbers improved in March. CPI, the key gauge of consumer spending, climbed to 0.4%, its highest gain since January 2018. The producer price index also looked strong, climbing 0.6%, marking a 5-month high.

Speculators covered 1K of their short positions and left their longs unchanged. They were 43.2K net shorts, which was only little changed from the 44.3K in the previous week. The trend is to the upside and its likely to continue

Buy USDCAD on dips in the short term.